The Arancia is of all fabric construction with removable floorboards. The floor of the craft is of fabric tensioned by a separate keelson tube fitted under the removable fiberglass floorboards. This forms a shallow vee section allowing the craft to maintain planing speeds through choppy conditions and turn more effectively. The shape of the hull, vee bottom, dimensions and materials used in the construction give the craft its characteristics and performance. A balance has been maintained to give the Arancia a good all round performance in surf conditions.

Where only the best is good enough. 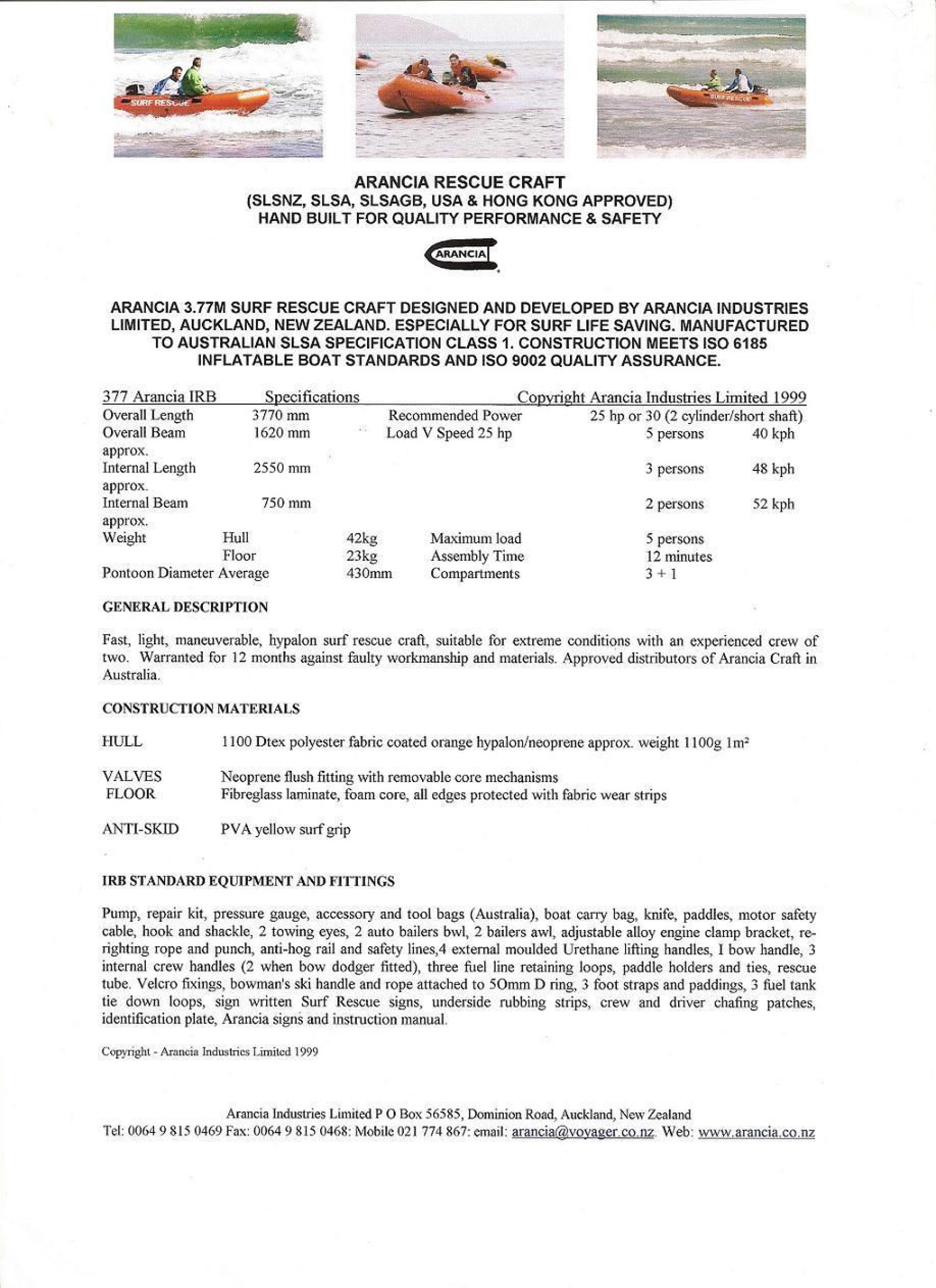 In the 60s to 80s when all quality inflatables built used Hypalon coated polyester or nylon fabrics, they were strong, reliable and they lasted. This does not appear to be true with many of today’s “Quality” inflatables.

Various publications extol the virtues of leading edge technology in fabric coatings of PVC and polyurethane. Could this be because these coatings are not so expensive and are easier/quicker to work with, consequently most manufacturers now use these fabric coatings and so make up the bulk of supportive advertising. So are they really superior to Hypalon? Refer to Inflatable Boat Network’s web site on the history of inflatable boats under “Types of Fabric”.

We agree with their reckoning that polyurethane/PVC can sometimes be lighter, thinner and less expensive to assemble than Hypalon. A lot less expensive and a lot less time consuming in the manufacture but not stronger. Under HEAVY DUTY FABRICS after listing major downfalls in manual assembly with Hypalon fabrics they mention larger inflatables and RIBs used for rescue and/or military still consider Hypalon to be stronger and more durable.

Is this the only exception when Hypalon fabrics are superior, stronger and more durable when they are heavy duty and used in testing conditions? We think not. Hypalon fabrics can also be superior for medium and small craft. As an example, Surf Life Saving used only Hypalon coated fabric inflatables up until the late 1980s when they approved polyurethane craft for beach rescues. After many failures and the difficulty in repairing polyurethane they resorted back to Hypalon as the only approved material for the manufacture of their inflatables. PVC was never considered suitable

Most of these craft are not large or RIBs. They are around 3.8m in length, of conventional all inflatable design including keelson, with floorboards that can be removed.

In the 24 years of Arancia manufacturing small/medium sized inflatables we have never experienced delamination or seam failure. All our craft are hand built.

So Hypalon is considered superior in large and medium size inflatables for rescue/military/commercial use. What about small? There are still a good number of quality Hypalon inflatables and Arancia Hypalon inflatables that are now over 20 years old. How many PVC boats of this age are still going? Polyurethane for boat use was not around then as far as we know of.

The only down side to building Hypalon craft by hand is that manufacture can take at least 2 to 3 times longer. Consequently the boats will be more expensive but the life expectancy for Hypalon Arancias is 15-30 years.

Some Early Arancia History
We produced our first designs in 1975 using grey Avon material (Hypalon) purchased through a lifeboat repair company in Colchester England. This fabric was packed in a Landrover exported to New Zealand and when we ran out of it we re-ordered. Little did we know of import regulations, import licences were only gained through extremely complicated procedures in 1975. However we eventually succeeded and manufacture continued. With the arrival of our first rolls of grey NCG (Italian) Hypalon material, we received a roll of bright orange Hypalon coated fabric. HORRORS. To send it back or build with it. All inflatables were either black or grey back then. The first orange boat – 10″ Sport Boat – however looked so special and dazzling compared with grey that we named the company Arancia (Italian for orange) and never again ordered grey material.

In 1984 Arancia stopped production of sailing dinghies, tenders, sport/dive boats to concentrate solely on Surf Rescue boats. This was a market which tested the limits of a small boat design to the maximum in rough seas, rocks and life or death rescue situations with some times no back up.

Job Description to us by Surf Life Saving New Zealand in 1978 was to design a boat which was:

Tough, light, stable, safe for the inexperienced, able to be launched and operated by two people for surf conditions up to 5 metres and with a low maintenance requirement. Surf Life Saving New Zealand approved our 3.8m Hypalon design craft in 1979 and to date, after 30 years, most of nearly 1000 produced are still in use worldwide.

ARANCIA WILL CONTINUE TO MANUFACTURE, BY HAND, USING HYPALON COATED FABRICS UNTIL SUCH TIME AS AN ALTERNATIVE FABRIC IS FOUND WHICH IS SUPERIOR TO HYPALON IN ALL ASPECTS 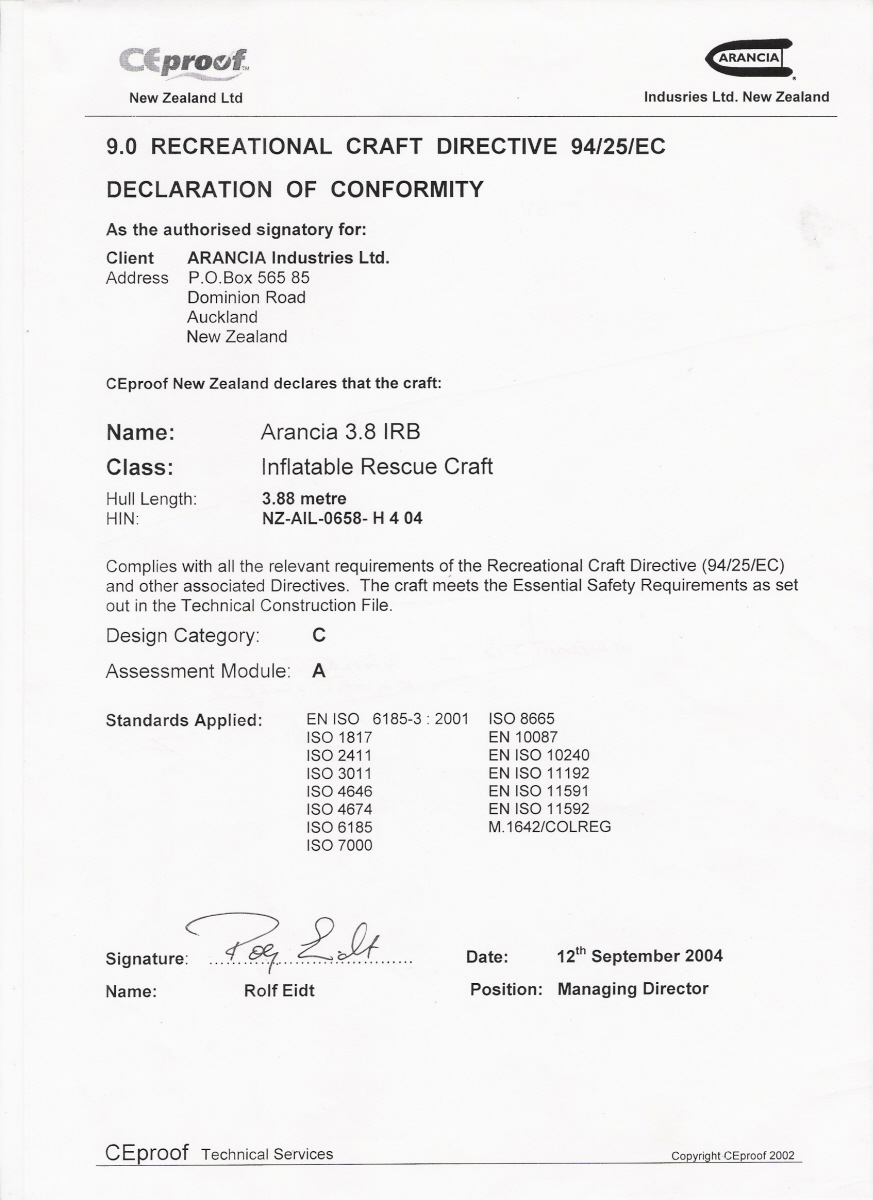 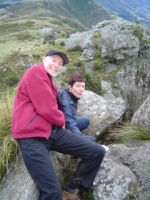